What is the Difference between a Coin and a Token

What is the difference between a coin and a token?

The words coin and token, as well as their French equivalents, coin and token, are very common terms in the world of cryptocurrencies to designate the different digital units of account that can be encountered, and are often used interchangeably. However, it is possible to make a more or less clear distinction between the two concepts and this is what we will discover today. 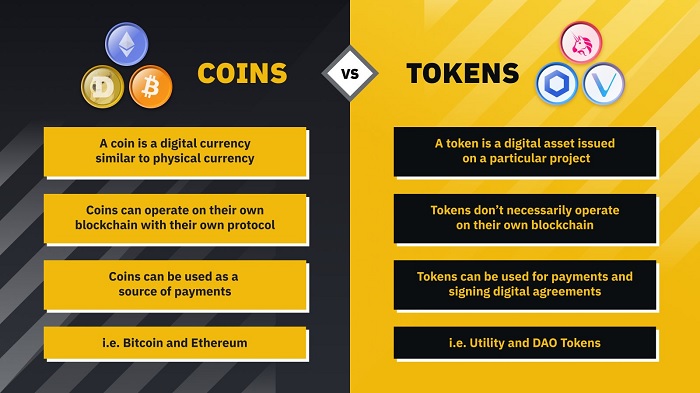 Before finding what distinction it is possible to make between these terms, we must look at where they come from and what semantic nuances we can draw from their origin.

Let's start with the English word "coin" which has the same etymological origin as the French word "coin". The word comes from the Latin cuneus which designates a kind of hard material tool (iron or other) used to split wood. Its prismatic form gave in French the main meaning of the word "coin", that is to say a place where there is a salient angle.

If in both languages, the word "corner" then designated the tool for marking metal parts, it was only in English that the tool gave its name to the product. From the 14th century, the coin therefore designated the coin itself, a coin made of metal and which most often had the shape of a disc and which could have a hole in it.

The French word "piece" has a different etymology since it comes from the reconstituted Gallic * pettia, deduced from the Breton pezh and from the Welsh peth. In French, the word designates the part of a set considered as a whole, and is found in the expressions "piece of meat", "archive piece", "piece of fabric", "pieces of the house", etc. This is why we speak of coins in general, and simply of coins when there is no ambiguity. The word "coin", however, retains a broader meaning than the word coin.

Let's continue with the word “token”, which has no French etymological equivalent, because it is derived from the Anglo-Saxon tacn meaning symbol, sign or proof. It was not until the 16th century that the word began to approximate the word coin by designating a marked piece of metal. Today it designates a stamped piece of metal or plastic, which can be used as a substitute for money, or as a voucher for a good or a service.

In French, the term closest to the token is the word "jeton", which is derived from the word "jet" to which the suffix -on has been added. It appeared with a botanical meaning during the 14th century, and then designated a new shoot, meaning that is still found today in the word "offspring". He subsequently designated a piece of metal, ivory or other material, flat and usually round, which was used to calculate sums. In the 19th century, the token acquired the same meaning as the token, by constituting an instrument of representation to symbolize a voucher for a good or a service: there were thus directors' fees, telephone tokens, Masonic tokens, etc. .

Confused use in the Crypto-asset World

These terms have been used to designate digital units of account in the world of cryptocurrencies and other crypto-assets. However, their use is somewhat confusing: as we said at the beginning of the article, the terms coin (coin) and token (token) are quite easily interchangeable. For example, some will speak of Initial Coin Offering to designate the pre-sale of digital units that they will later call tokens.

The word coin has acquired several meanings in particular. First of all, it can designate currency in the general sense (as we speak of the euro) or a unit of this currency (as we say "a euro"). This is particularly glaring in the case of bitcoin: in this way, we can sometimes say that we “used bitcoin to pay”, sometimes that we “paid two bitcoins to buy a car”. In addition, it also happens that the words "coin", "token" or "token" are used in the same context.

Then, a coin or a coin can also have a technical meaning and denote a UTXO, a cryptocurrency coin of an amount defined by a transaction: "a coin of 12,546 satoshis". This is the meaning that the word has in the Electrum wallet for example.

Finally, to add to the confusion, a wedge can, by metonymy, designate the entire system that supports it. This confusion is reinforced by the fact that the first cryptocurrency protocols all had the same name as their unit of account: Bitcoin and bitcoin, Litecoin and litecoin, Dogecoin and dogecoin, etc.

A distinction between Coins and Tokens

According to this distinction, a coin (or a coin in French) is a native unit of a crypto-economic system, that is to say a unit born at the same time whose existence is essential to the survival of the system in question. In this category, we will meet the bitcoin which serves as the basis for Bitcoin by being used to pay transaction fees and by rewarding miners who use their computing power to secure the network. We will also find the ether, which is used as fuel for the platform of autonomous contracts Ethereum. Finally, the ripple (or XRP) will be used to pay for the costs on the eponymous network.

Note that it is possible for a crypto-economic system to depend on multiple units of account, and therefore there may be multiple coins for a single system. Thus, the Neo protocol has two native units:

The neo (formerly known as AntShares), which represents an action giving the right to participate in the consensus (DPoS), to vote in the internal governance system and to receive dividends in the form of neogas;

Neogas or gas (formerly called AntCoin), which serves as fuel for the platform by allowing transaction fees to be paid, and which should not be confused with Ethereum gas which operates differently.

On the other side of the distinction, we find the token (or token in French) which is therefore a non-native digital unit evolving on the register of a protocol that does not depend on it to function. As you may know, it is indeed possible for users to issue tokens on an existing blockchain! Thus, we will find in the category the Tether USD (USDT) which exists on the Bitcoin chain thanks to the Omni metaprotocol, the Basic Attention Token which is an ERC-20 token evolving on Ethereum, the cryptokitties which are non-fungible tokens of the type ERC-721 which also exist on Ethereum, the BitTorrent Token which is a TRC-10 token of the TRON blockchain, or the Spice Token (SPICE) which is traded on Bitcoin Cash.

These Non-native Tokens are Generally issued to have Specific Roles:

The Limits of this Distinction

However, this coin-token distinction is far from perfect and has flaws that we'll look at here.

Let's start by saying that CoinMarketCap does not apply its distinction consistently. First in the Neo system, the corner tag should be assigned to the two inherent protocol units (neo and neogas), but CoinMarketCap classifies neogas as a token for some reason.

Second, according to its own lexicon, the site claims that a coin is "a cryptocurrency that can operate independently." However, at the same time it classifies OMNI and XCP (Counterparty) tokens in the category of coins, while neither can exist outside of Bitcoin, and Bitcoin can quite exist without them.

Then, even if we systematize this kind of distinction, we quickly realize that it does not necessarily correspond to the etymological origin of the terms and therefore to the meaning that we have of its terms. In everyday language, the coin and the coin have a monetary meaning, which the terms token and "token" do not. Thus, a coin will be used as an intermediary of exchange to obtain goods and services, and will derive its value from this utility.

Conversely, the token and the token have a symbolic meaning: they represent something that is not there. Tokens are what used to be called mereaux: vouchers for something, signs of recognition, or passes. They derive their value not from their monetary qualities, but from the physical or digital object they represent.

The distinction according to "nativity" is therefore contrary to the current meaning given to these terms, and it is possible to ask questions about the category of certain numerical units:

Where to classify ether, the unit of account of Ethereum, whose main role is not to be a currency but a fuel for the platform? Logically, it should be classified as a utility token used to run a platform of stand-alone contracts. However, its monetary role is factually far from zero, and it seems that any basic unit of a decentralized system is doomed to serve as money to some degree. This reflection holds for classic ether, tez, EOS, tronix, Binance Coin, etc.

What about a stable coin like the Dai, which the classfication considers as a token? The latter is issued and traded on Ethereum, but has an essentially monetary role, in particular for its quality of store of value. In addition, unlike other stable coins like USDT and USDT, its value is determined algorithmically: the Dai is not the representation of a claim on a trusted third party (like Tether or Circle). So we could just as easily classify it as a wedge.

What to think of the neo, which intervenes in the consensus of the Neo platform, but does not directly constitute the fuel of this one? Only the neogas should indeed be considered as a corner, and all the more so since the neo is indivisible.

Thus, if the current coin-token distinction has its merits, we must nevertheless ask the question of its relevance, which does not take into account the role of digital units themselves. Anyway, the meaning of these terms is not yet really determined today and the ecosystem evolves so quickly that the conceptions that we have are doomed to be turned upside down over time.