Home news Asymmetric Cryptography : What is the Link with Bitcoin?

Asymmetric Cryptography : What is the Link with Bitcoin?

Asymmetric cryptography : What is the Link with Bitcoin?

If you are familiar with Bitcoin, you will often come across the notion of public key and private key. But do you know what is really behind these terms? Let's take a look at what asymmetric cryptography is and relate it to Bitcoin.

What is Asymmetric Cryptography? 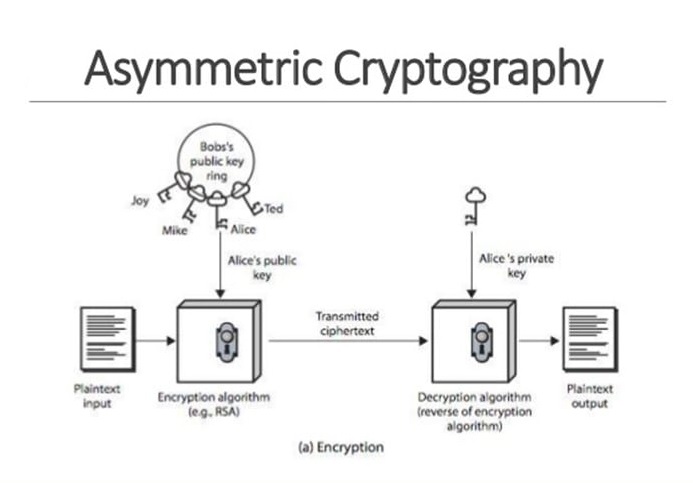 Cryptography is the science of data encryption. This is what all blockchains have in common.

Let's start by explaining what symmetric cryptography is. This encryption method consists of encrypting a message using a key and decrypting it with the same key.

Suppose Robert wants to say something to Jacqueline by encrypting her message. He will do this using an encryption key that he will share with Jacqueline so that she can decode the message.

In asymmetric cryptography, anyone can send a message by encrypting it with the public key. The recipient can decrypt it using their private key.

In our example, Jacqueline transmits her public key to Robert, without fear that the latter will allow the message to be decrypted (hence its public key name). Then Robert encrypts the message and sends it to Jacqueline, who decrypts it with her private key:

What do Bitcoin Transactions Contain?

Before we explain how Bitcoin uses asymmetric cryptography, let's understand what is in a transaction.

Back to Jacqueline and Robert. The two now know that “Cryptoast is family!”, But Jacqueline wants to send 0.1 BTC to Robert to thank him for advising her on Cryptoast to find out about Bitcoin.

Jacqueline will therefore fabricate a message that says: "I am sending 0.1 BTC, from my wallet which has the address AM40T8, to Robert's wallet whose address is N09OP0".

Addresses are simple derivatives of everyone's public keys. They tell you where the bitcoins are coming from and where they should go. They represent the RIB in the traditional banking world. All Bitcoin users can know these addresses.

In addition, the transaction contains Jacqueline's signature which allows her to be authenticated. The signature is another element that makes up the transaction, in addition to the addresses and the amount. This is obtained and verified by an asymmetric cryptography process that we will study below.

For this transaction to be permanently written into the blockchain, it must pass through the hands of Bitcoin miners.

Like when she writes a check in euros, Jacqueline will have to sign her transaction to authenticate with the network that she is responsible for it.

The signature is an incomprehensible string of characters for the common man. It is generated thanks to the algorithm using Jacqueline's private key and her message. For example :

Thanks to the algorithm, anyone can verify that this signature was indeed generated by Jacqueline to perform this transaction. For this, we must use the same algorithm with the signature, the public key of Jacqueline and the message of the transaction that she sent.

Thus, everyone (including Robert) can ensure that it is she who is at the origin of the transaction of 0.1 BTC from his wallet to that of Robert.

The use of asymmetric cryptography brings two things to Bitcoin. Transactions are impossible to forge because they are signed by the issuer's private key. Moreover, the author of this one cannot deny having made this expense, since he is the only one to have been able to quantify it thus.

This is why it is essential to keep your private key secret. You must not communicate it under any circumstances. Otherwise, your funds are no longer yours, as anyone can sign transactions for you.

When you discover Bitcoin and asymmetric encryption, you might think that its protocol is making you anonymous. Yet the reality is quite the opposite: the Bitcoin blockchain is perfectly public, and anyone can view and verify all transactions on the network.

By the way, Bitcoin is a pseudonym. Your public address hides your name, but not your actions. So, if someone manages to link your identity to your public address, your wallet will be known to everyone by taking stock of all your transactions.

You can still use Bitcoin confidentially or even anonymously. But anonymity is not native to the protocol, you will need to make some technical effort to achieve it.

Asymmetric cryptography is a method of data encryption that involves encrypting and decrypting messages with two separate keys.

Bitcoin uses it to authenticate and secure transactions made over the network.

Also, don't think that this makes Bitcoin anonymous. To blend in, you will need to use specific software called mixers.