The American company Honeywell announces that it has created a quantum computer twice as powerful as its two competitors: IBM and Google. Should Bitcoin and Cryptocurrency Holders Be Worried? 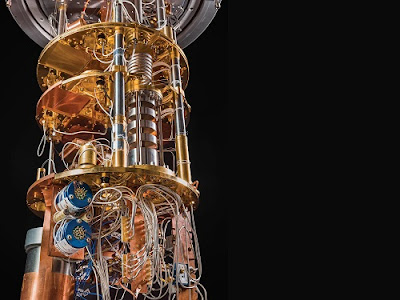 Honeywell announced that its latest computer reached a quantum volume of 64. This computer would be twice as powerful as IBM's and Google's computers.
What is quantum volume? Quantum volume is a metric created by IBM that measures the capabilities and error rate of quantum computers. By comparison, IBM announced in January 2020 that its latest quantum computer named Raleigh had achieved a score of 32.
At the heart of Honeywell's quantum computer is an ultra-vacuum chamber the size of a basketball. The sphere contains a vacuum with five times fewer particles than outer space. This sphere is cooled by liquid helium to a temperature close to absolute zero (-273.15 ° C). Reality is slowly approaching science fiction.
Each year, Honeywell wants to increase the quantum volume of its machine by a factor of 10. The company aims to reach a score of 640,000 by 2025.
Don't Miss >> Bitcoin-Generated Pollution (BTC) has increased Since Last Year

According to a June 2017 article published by NASA (then deleted), a quantum computer would need to have around 2,500 qubits of computing power in order to break the encryption used by Bitcoin (BTC).
Today's most powerful quantum computer has a 72-qubit processor. However, if a computer had sufficient power, it would theoretically be possible for the owner of that machine to take control of the Bitcoin blockchain.
Blockchain experts have claimed it will take at least ten years before this becomes a problem for the industry. Others predict that quantum computers could be powerful enough to threaten Bitcoin as early as 2022. As a result, discussions are underway to ensure that Bitcoin will be resistant to potential attacks from quantum computing.
Read More:
https://www.insidequantumtechnology.com/news-archive/honeywells-new-quantum-computer-edges-closer-to-threatening-bitcoin/