A study by the Joule newspaper published on June 12, 2019 indicates that Bitcoin-related pollution (BTC) is still as high and continues to increase. BTC mining consumes a lot of electricity, the source of which is mostly non-renewable. 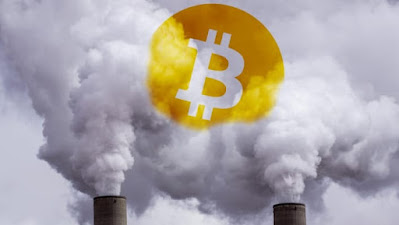 Bitcoin Pollution : Numbers that are Not Improving

At a time when all eyes are on climate change and efforts to reduce greenhouse gases, Bitcoin is an exception. The power required to mine BTC has quadrupled since last year. And that is not likely to change with the halving which will take place in less than a year.


In total, the world's largest cryptocurrency produces 45.8 terawatt-hour (TWh). This represents emissions of 22 to 22.9 million tonnes of CO2 equivalent. This large figure corresponds to the total consumption of countries like Jordan and Sri Lanka, or the city of Kansas City


The report points to three main fuel sources: “Chinese coal, Icelandic geothermal power plants and Venezuelan subsidies. "He also recalls the objectives requested:" So that global warming does not exceed 2 ° C - as was decided at the COP21 in Paris - zero energy carbon emissions are crucial for the second half of the century. To take the right steps, policymakers must therefore understand the carbon footprint of cryptocurrencies. "

Proof of Work, a Great Enemy of Ecology

As Joule points out, some Proof of Stake based cryptocurrencies are more eco-friendly than those that use Proof of Work. This is particularly the case with Stellar (XLM) or Binance Coin (BNB). The problem is that Bitcoin has such hegemony in the cryptocurrency market that it seems impossible that its competitors will be able to oust it - at least not in the immediate future. And it is not in the interests of miners to change the protocol, as long as the protocol remains profitable.


That said, from a global perspective, cryptocurrencies represent "only a relatively small fraction of global issuance." But the report believes this is a good place to start in reducing our footprint. “Regulating this source of carbon emissions seems like a simple way to help 'decarbonize' the economy.


The solution could therefore come from renewable energies, if they develop sufficiently. China would thus have a great role to play. If it ultimately decides to ban crypto mining, as is its plan, it could shut down much of the most polluting geographic area for BTC mining.


Bitcoin pollutes, but in a moderate way. Indeed, the majority of the electricity used comes from renewable sources whose produced energy is not used!


Read More : How To Use DAI With Leverage?